What is Supervised Machine Learning? || LN-TECHINFO 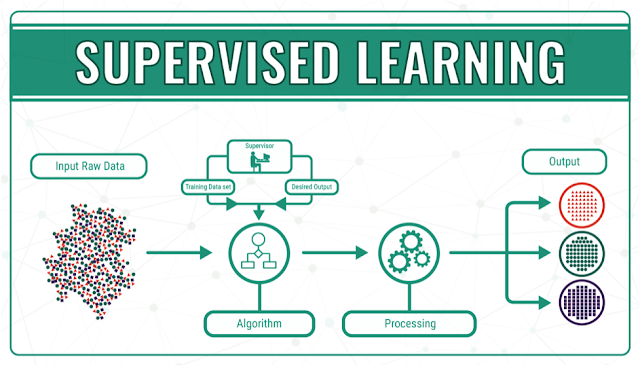 As the name suggests, Supervised Learning has a Supervisor who we can also call a teacher.
Basically Supervised Learning is a learning in which we train the machine with Supervised Data or Labeled Data, then after this training, the machine is able to estimate the correct output for any other Input.
Let’s understand this with an example, so let’s say you have a bucket which has four kinds of fruits like apple, banana, grapes and oranges. Now, because we have already told the Supervised Model about the fruits in which color and which shape is its shape, it will easily separate all of them. So we call it Supervised Learning because we had already trained the model with training data.

So in this way we can say that it is learning in which we train the model with Labeled or Training Data which is actually Training Example ; Consist by keeping, then this model becomes capable that it can easily classify any kind of problem or Situation.

In order to solve any supervised learning problem, we have to follow these steps.

Some of the most used algorithm names –
A variety of algorithms by engineers; are used which are divided into two Groups. These algorithms are called supervised learning methods. These methods are – Regression and  Classification. The main goal of both is to determine the relationship or structure in the input data which can get us the correct output data and both have Goal to find the value of the dependent variable from the attribute variable. The only difference between the two is that the dependent attribute for the regression; is numerical and the dependent variable for classification; It is categorical.
So here comes a question, when should we use which method?
Classification: Output Variables in this are called Labels or Category because it has output; In the form of categorical means it means that the output is divided into two or more categories such as an email can be categorized in two ways Spam and Not Spam, categorize an age group into three children, young and older. do.
So when we have to solve an AC problem where we have to create categories or labels.
So we use Classification Algorithms

Discrete or Real-Valued in Classification; Input can be Variable.

Classification problem can be described in two ways-
Regression: Output Variables; There are continuous values ​​such as Amount, Volume or Size. For example, if the price of a house can be between 5 lakh to 10 lakh, then Regression; Task is to predict the constant quantity.

The Regression Problem can also be described in two ways –